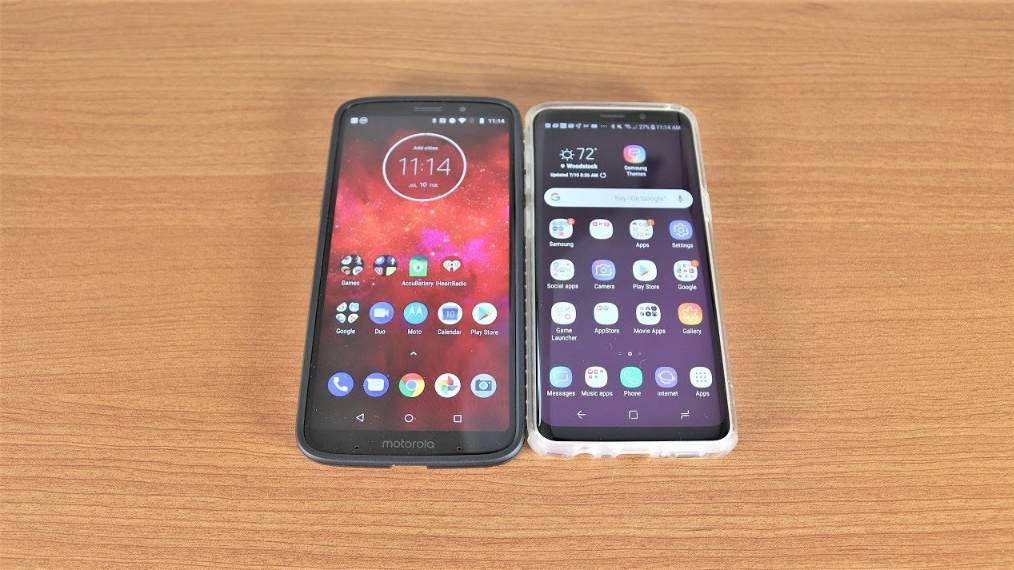 Moto Z3 Play 128GB: The Moto Z3 Play has a contemporary appearance and dual cameras. The Moto Z Play line from Motorola has consistently offered a wonderful blend of contemporary features and specifications at an accessible price. This time, the Play line has seen some of the biggest changes thanks to the brand-new Moto Z3 Play.

it has the same general design and footprint as earlier Moto Z devices. All Moto Z3 Play models will include a free Moto Mod and are compatible with all 14 of the current Moto Mods. The redesigned, mainly glass shell and slimmer profile of the Z3 Play make up the majority of its design modifications. The Z3 Play has a glass front and back, as do the majority of modern smartphones, and a metal frame that wraps around the edges. Although the craftsmanship is strong and feels fantastic, it doesn’t really stand out.

The headphone jack is sacrificed in order for the Z3 Play to be slimmer than its predecessor. Although it may no longer be shocking, the Z Play series’ headphone jack was a major selling point given that the Z flagships lacked one. Although Motorola provided a 3.5mm-to-USB-C adaptor in the box, the omission is nonetheless regrettable. Although they aren’t particularly widespread, side-mounted fingerprint sensors should be. The fingerprint sensor’s new location on the Z3 Play is another significant adjustment.

The display on the Z3 Play has been updated. Compared to its predecessors, it has substantially lower bezels on all sides and an 18:9 aspect ratio. FHD+ resolution Super AMOLED technology is used on the 6.01-inch screen. The AMOLED display has good viewing angles and brightness, and it is vivid and colourful. With the deep, profound blacks typical of an AMOLED panel, contrast is also great. Although the FHD+ resolution might seem a little low, I had no issues. It’s sharp enough to comfortably browse the web and watch movies.

The U.S. version of the Moto Z3 Play has a mid-range Qualcomm Snapdragon 636 engine, 4GB of RAM, and 64GB of storage. An additional model with 6GB of RAM and 128GB of storage is available globally. The Z3 Play handled whatever game I threw at it with fluid frame rates and was quick to multitask while running programs. It is also quick and responsive to swipe through the user interface and browse the internet. Unfortunately, battery life performance isn’t quite as good. The 3,000mAh battery could only last me through a light to moderate day, despite the Snapdragon 636’s high processing efficiency. Screen time regularly exceeded four hours, but never more. By today’s standards, it’s very typical.

The secondary 5MP sensor’s sole purpose is to record depth data for portrait mode or effects like background blurring. The front-facing camera now includes an 8MP sensor and a portrait mode, but because there isn’t a second sensor, it isn’t quite as sophisticated or feature-rich. With Google Lens support now integrated into the camera app, conducting virtual searches directly from the camera is a breeze. Cinemagraphs, another new function of the camera, allow you to take a picture with motion and enable you to choose which portions of the picture move and which sections remain stationary.

The camera offers passable pictures in daylight or well-lit situations, but colours lack vibrancy and details don’t look sharp. The Moto Z3 Play 128GB camera produces images that are at best acceptable in quality. The camera functioned admirably in daylight or well-lit environments, but colours lacked vibrancy and details weren’t clear. In low light, there is a major quality decline. Highlights are extremely overexposed, colours are washed out, and noise is very noticeable. In low light, the camera has trouble focusing, making it occasionally challenging to acquire the desired photo.

The Moto Z3 Play experience is remarkably similar to stock Android thanks to Motorola. It’s one of the few consumer experiences that rivals Google’s Pixel smartphones. Motorola claims that during the lifespan of the Z3 Play, it will enable two OS upgrades in addition to Android 8.1 out of the box. The standard software features from Motorola, including Moto Display, the flashlight double chop, and a twist of the wrist to start the camera, are all still available. The most recent software improvement allows users to swipe across the UI utilising the on-screen bar at the bottom of the screen. The gesture controls that were formerly accomplished by swiping on the front-facing home button have been replaced by this.

Originally retail for $499 unlocked in the United States, the Moto Z3 Play is now $329, which is more in line with what you’d pay for a mid-range smartphone. The Z3 Play is a fantastic mid range phone when judged just on its own merits, but unless you greatly value Moto Mods and Motorola’s software suite, it’s definitely not worth the money.

Huawei Mate 50 Pro Will Be Available in August Or September